I have finally come to terms with the fact that incorporating netting just wasn’t working out as I had hoped. It’s not that the idea is a bad one – I think it’s more that the netting that I am using is too stretchy. It’s just some really inexpensive IKEA curtains that I’ve got laying around that I was hoping to use for something (because I have quite a few of them for some reason). But wanting to use them and them working out are two very different things.

So I decided to continue with the idea of some small, geometric works in four inch hoops.

But this time I opted to attach the work to a fabric remnant (that I adore, I’ve used it several times) and to keep the stitches on the simple side. I have three more to complete – but the execution is much simpler and the effect is just as nice.

Still, I will be hanging onto the idea of using a netting or a mesh in combination with the paper because it’s just not going to go away, I will simply have to find better material and a better time to implement it properly.

I spent last week home with my kids for spring break while my husband was off at a conference. Naturally, I had big plans for getting a lot of things done. I did get a few things completed, but mostly I just hung out with the kiddos. There are about six weeks left until the arts festival – I would like to have more than six more pieces completed before then.

Can I make more than one a week?

Do I have enough ideas?

And how am I going to display it all at the festival?

So many things to figure out, but if I’m honest with myself, I never expected to have it all figured out until the last minute (that seems to be how I roll these days).

Oh, and not to mention that I want to redesign my whole website!

Been quiet, but busy 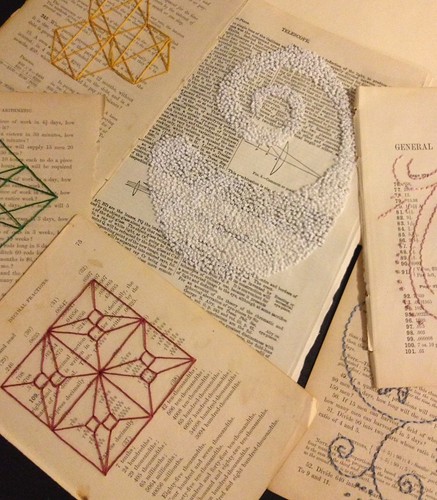 I’ve been trying to keep my mind and my hands busy, making some new pieces in preparation for the arts festival I’ll be selling at in May*. I’ve still got my display to plan, but there’s time yet (that’s what I keep telling myself).

My latest work of late is that pink doodle piece on the upHper right-hand side. With the doodles, I like to work pretty impulsively. Usually though, I have to plan them out just a little because I have been doing the sketching on the reverse so my lines don’t show under the stitches. It mostly works well. But sometimes I just want to do it on the front and not have to worry about reversing the design in my head (or on paper while planning).

Back in February, I read a post about these erasable gel pens. What erases them is the heat from the friction of rubbing the little plastic end on the paper — or an iron. Or, iKn my case, a hair dryer. They leave the slightest of marks behind on my vintage paper – but when stitched over you cannot see them. It makes it easier for me to be a little bit freer in my doodling – and it results in smoother curves. I won’t use this method all the time, but it’s a nice one to have in my bag of tricks.

*Though maybe not that swirly French knot one. I’m not sure it’s done… but that’s for another day…

Posted in inspiration, on paper | 2 Comments

After considering it for a while (and thanks to some family members willingness to lend me a tent and a table), I’ll be putting my application to the hometown arts festival in the mail today.

In thinking about what sort of work I’ll be taking with me, I have been trying to figure out a way to incorporate some hooped work. Recently this has taken the form of experimenting with some netting. It’s not quite there just yet, but I am not ready to give up on the idea.

Still, I’ve been taking breaks and turning back to a piece that will be all French knots. I’ve made still more progress since this last photo and I’m finding that stitching it is incredibly calming. It’s really starting to take shape and I can’t wait to get back to it tonight.

Just a Bit of Planning (but not too much)

For me, it’s always a bit of a tricky balance between planning and sketching out how something is going to go and actually getting started on something. If I wait too long either an idea gets old and becomes uninteresting in my own mind, or I get too caught up in getting things just right and the project never gets started.

Being that it’s a new year and all, I guess it’s as good a time as any to try and be better about thinking less and jumping in and just starting something while the idea is fresh and somewhat well-formed.

At the end of November, I ordered a batch of vintage paper and received some really awesome pages, including three about telescopes. Further, we had just taken the kids to the Air and Space Museum in DC so I had a slew of iPhone photos of various exhibits that were interesting to me. So instead of getting things just right, I made a list, took a poke around at some images, made a rough sketch on the reverse of a page and just started to go for it.

Who knows if it will turn out the way I see it in my head, but at least it’s getting done!