Earlier this morning, my friend Heidi sent me a message making sure that I’d seen this Pin. And I immediately wanted to try the idea with some old family photos I have. Fortunately, we had some iron-on transfer paper of the right type. I printed out two 5×7 images. The first of my great-grandmother Anna at about age 7 on her First Communion.

I also printed one of my favorite photos of my great-grandparents, Anna (same as the 7 year old above) and Adam. It was taken sometime in 1931 and they just look amazing. Maybe at some point I’ll figure out where they were going.

I played around with it just a little bit while I was taking a break for lunch. I have a few other photos of them that I love too and she’s always wearing the best hats. 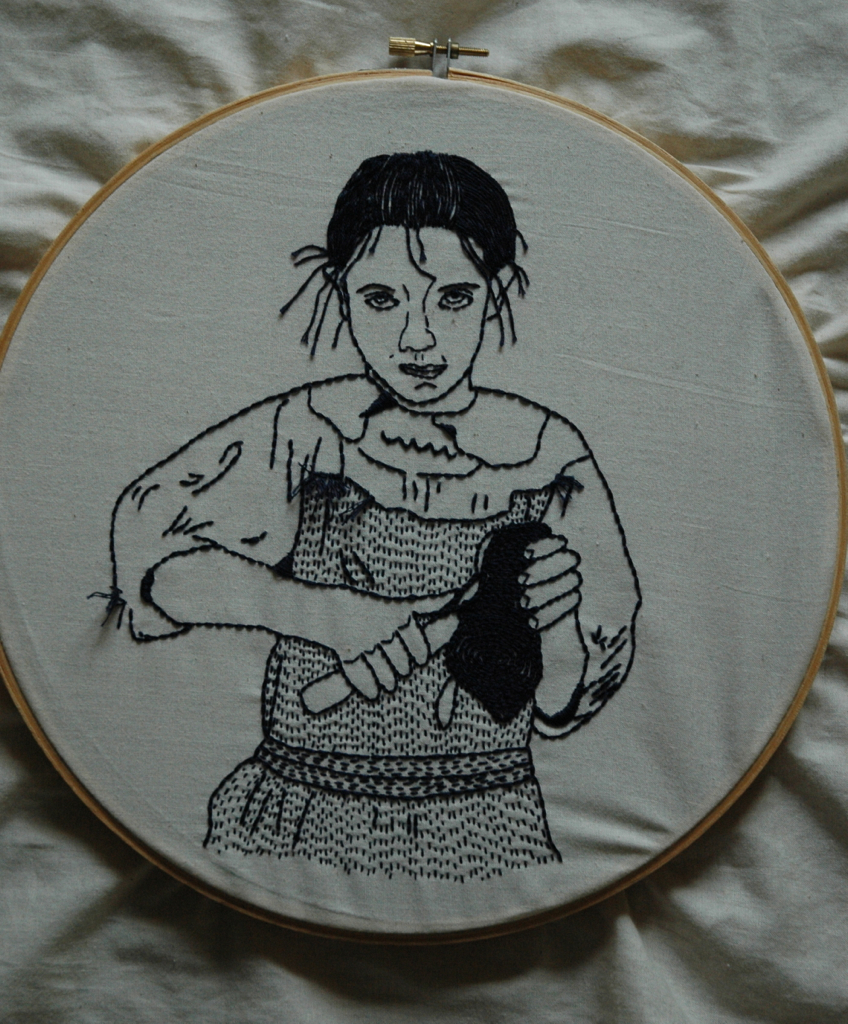 The short story is that this piece is based on this photo by Lewis Wickes Hine.

Keep reading for the longer story.

I have long been enamored with Hine’s photography. If you are a lover of turn of the century photos (as I am), then you have probably run into more than one of his photos. Street urchin? Newspaper boy? Probably a Hine photo.

When I started doing more research into my family’s history and genealogy, I grew to love his work even more — particularly his child labor photos and more specifically, the ones of families and children working in and around canneries on the East Coast.

My grandfather’s father was born in Biloxi — though all his siblings were born in Maryland and they lived in Baltimore. His parents are listed as working in a packinghouse/cannery in Baltimore in the 1910 census. Further, there was a vague feeling that they were “migrant” workers. All of this leads me to believe the family worked for a few months of the year down in Mississippi.

At the turn of the century, the seafood industry in Biloxi was experiencing a boom and there was a great need for skilled labor to work in boats and at the canneries. But the owners didn’t want to have to train people. As it turned out, Baltimore was home to the most experienced laborers — most of them Polish. So, many Biloxi companies employed seasonal workers from Baltimore, providing them transportation via train, and housing near the cannery. Children worked alongside the women in the canneries and the men generally worked out oystering and shrimping.

When I see photos like the one of Rosie, or this one or the myriad others Hine took, I can’t help but imagine what it must have been like for the members of my family who most likely worked in such conditions.

Since it’s the New Year and everything, I thought it would be good to write down a few things that I’ve been wanting to accomplish and/or become better at doing.

Firstly, actual blogging. It’s been fits and starts for a while now. I don’t know that I want to set an actual schedule, but I’m thinking I can post more frequently than once or twice a month (which is the average around here). December was a good start. Six whole posts all in the same month.

Secondly, I would like to be a better drawer. Doodling shapes and squiggly lines is one thing — and don’t get me wrong, I adore both of those things — but I would really like to be better at actual drawing of real things. Thus, I embarked on a little adventure last night. It really started out as a tracing exercise — I’ve drawn on vellum over a photograph — but it’s still a bit tricky. 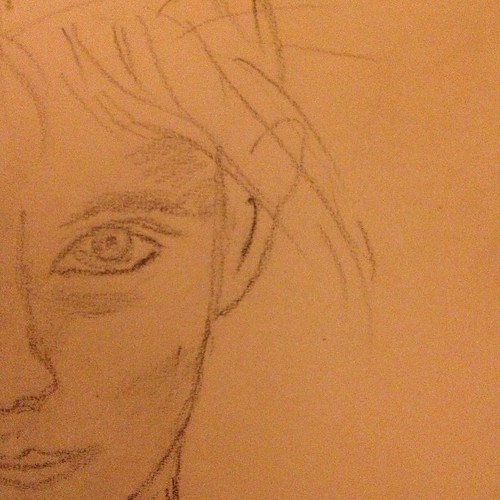 Further, as I go along and stitch I need to reference both the drawing I made and the actual photo. So it’s not all just trace and go. 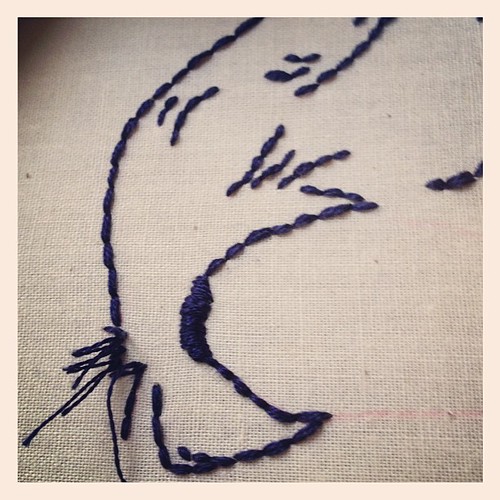 I don’t want to sell myself short because I think there’s a fair amount of skill that I’m using here, but I did not draw from scratch.  Still, practice is practice and I know the more I do it, the better I’ll become. I am casually looking for a class here and there, but nothing right has come up so far.

Her name is Rosie, and that’s all I’ll say until it’s finished — I don’t want to spoil it. I’m saving the harder bits — hands, face and hair — for last. So far, I’ve used just about a skein of floss and three types of stitches. I’m planning on at least two or three other stitches, and a bunch more floss.

More ideas than I know what to do with!

This Christmas I got some lovely stitchy presents, including the stand pictured above. I’m excited to have it and looking forward to working on some larger pieces without a lot of shoulder pain.

I’ve been testing it out, and getting the height and angle right. At the same time, I am working on another idea that I have cooking. I think this particular idea will be much longer term. I still haven’t nailed down exactly what I want to stitch, but I know how I want it to feel. Olisa just posted about having a vision and editing and loving the process. I couldn’t agree more.

In addition to this big piece that I’m still figuring out, I have two other things hanging around in my head. Yesterday the local needlework shop (which is wonderful, by the way, if you are in Northern Virginia, head to In Stitches Needlework and they will do you right!) was having a holiday sale and I picked up some hand dyed red, white and blue floss for a paper piece (not sure though if I am using all three or just one or two colors), new scissors, some dark grey and some lovely linen for a blackwork piece that I have had an itch to do. Mostly, I find that I let an idea work in my head until I just can’t stand it anymore and I must stitch. Otherwise I find that I will start something and then leave it unfinished for ages. (The bulk of the floss and the blue hoop are for my daughter who after stitching up an ornament this Christmas wants to do more embroidery. Yay!)

I can’t wait to get started on everything! 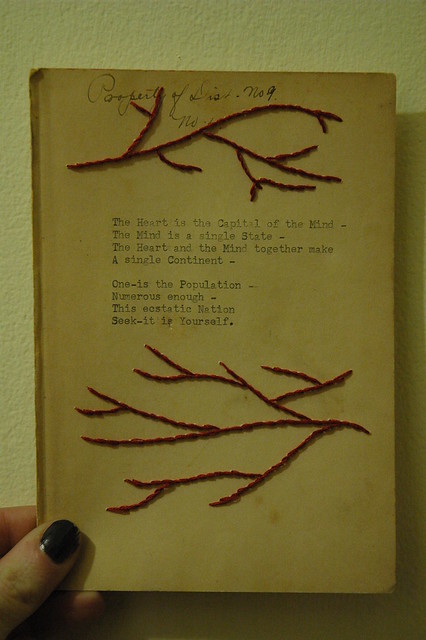 Here’s the piece I made for myself the other day, not even realizing it was Emily Dickinson’s birthday when I completed it. A nice coincidence.

Back in my college days, I took a seminar on her poetry and have been smitten with this particular verse since then. I’m quite happy with the end result. I particularly love the way the typewriter made little ghost “t’s” — likely because I was thumping so hard on the keys.

I’ve been on a bit of a making/creating tear lately. There will be more to share in the upcoming weeks.