That tiny voice which wonders… 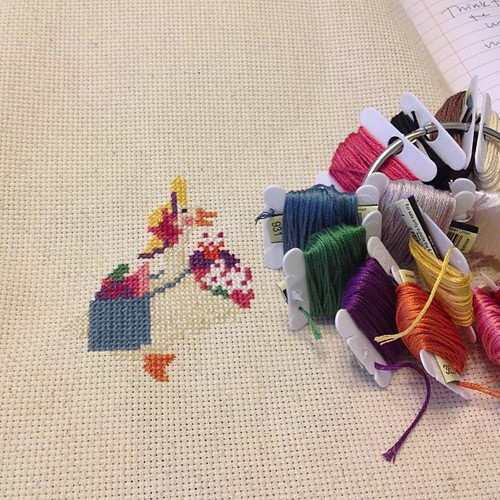 I have finished up the bear that was giving me so much trouble earlier, and moved on to a duck. This one was slightly less frustrating but there were still plenty of mistakes. However, not all of them needed to be fixed. I’ve left at least five in there. I don’t mind them — and I think in the end only I will know they exist — if I remember about them at all.

Once this one is finished I am going to move on to the embroidery portraits that will accompany them. Now, initially I was so utterly convinced that this was going to be a stupendous idea/project. It came to me one morning on the bus to work and I could not wait to get home to get started. But now? Now I am starting to wonder…

I’ve been compiling images that I’ll be using for the portraits onto a secret Pinterest board. I’m finding the secret boards to be wonderful for this purpose. I’ve got one for “secret stitching” and one for “completed projects”. I like keeping my ideas to myself while they are still cooking. But I’m starting to feel just a little tentative about putting everything together. I don’t think I’ll really know until they are all finished. And even then, who knows! I think it might be that these individual cross stitch pieces are so not my style and I’ve been staring at them for a while.

For now, I’m going to try and push down any doubts and carry on as if I’m as confident as I was a few weeks ago. I’ll keep Simon de Pury’s voice in the back of my head: “Be Bold! Be Brave! Be Amazing!”

UPDATE: So here’s the idea… I have these horrible 80s cross stitch patterns (seen here). I’m thinking of creating pairings of one 80s cross stitch and a portrait of a suffragette. I’m thinking the bear paired with Lucy Burns and/or Alice Paul. Both went on a hunger strike in 1917 at the Occoquan Workhouse which is right down the road from my house. If I put Lucy with the bear, then I might pair Alice with the duck or I might do Inez Milholland riding on a white horse at the front of the 1913 suffragist parade in Washington. I just wonder if it will translate properly. I think I need more pairings… But we’ll see. If it doesn’t work, I figure I’ll at least have some embroidery portraits of suffragettes that will be awesome.

14 Responses to That tiny voice which wonders…