It’s becoming more and more clear to me that I am better suited to the freedoms of embroidery over counted cross stitching. This is actually a bit on the surprising side since I generally crave order and symmetry. But alas, I am not the most patient of people. 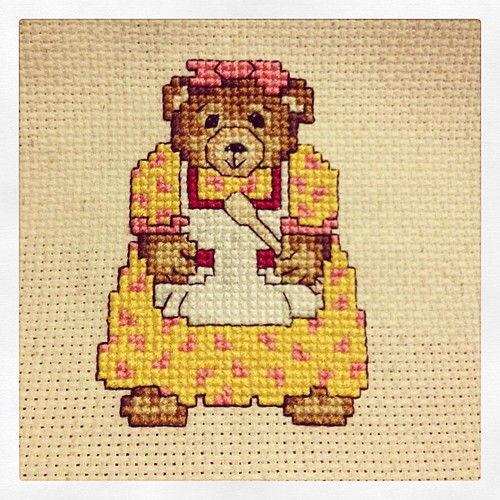 Take this bear that I’m working on now, for example. I had so much trouble putting the browns in the right spot (and picking up the right color) and those pink spots on her dress… so endlessly frustrating.

The text around the bear was going well until… 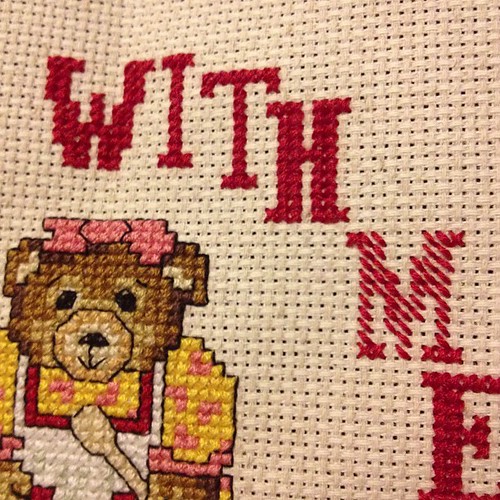 I went and put the “W” in with in the wrong spot — which put the whole word in the wrong place. Thankfully it’s only those four letters that need to be moved. But I was so sure I was going to be done last night. Of course, this is one of those ideas that I have in my head — next I am hoping to do a duck — so I am Determined to get this done. There will be some companion pieces — embroidery ones. I am saving those for the end both because I only have a sense of what I want them to be and because I will enjoy them more.

I keep hoping that with practice I will be better. I take the same approach with cross stitch as I do with other things and here it amounts to count twice & stitch once. Only it’s more like count six times, stitch three. Sigh. I will be glad to get this one done so I can move on.

Here’s to not giving up.

4 Responses to Slightly frustrated, but determined