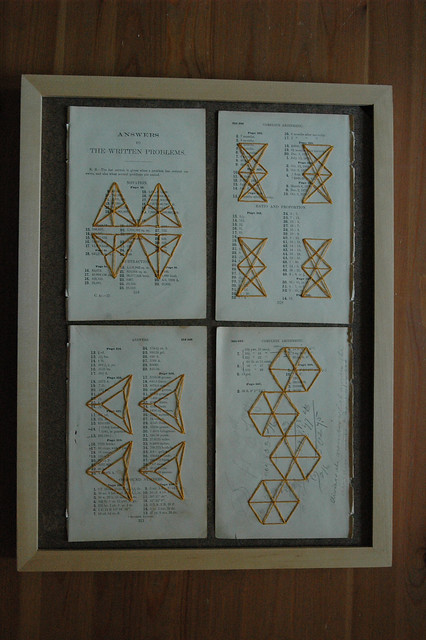 Congruency: Variations on the Utility Graph.

This piece started out slightly different (as seen here) back when I gave a tiny peek into what I had cooking in my brain. I was just playing around with different configurations of my favorite and old friend, K 3,3. I realized though that I would be happier if the graphs were exactly equal — that is if there were four graphs on each page. And so, I kept the two pieces on the right and modified the ones on the left. Further, I used the opening page of the Answers section for the upper left-hand piece (and the last page was used on the bottom right-hand one). But the thing that made me the most happy was the rotation I added to the bottom left-hand graph. I wanted the almost-triangles to look more different from the triangles above them.

To me, this piece is about things that appear to be quite different, but are fundamentally the same — the same number of points, the same number of lines, simply arranged in another configuration. Is this idea the answer to everything? No. But for a lot of things, this idea of being congruent can be key.

(And yes, I sort of made up the word “congruency” but I liked it better so there.)

Posted in inspiration, on paper

2 Responses to The Full Story