My Phat Quarter January swap pieces made it all the way across the Atlantic to Nicole this week and I’m so pleased that she likes them.

Honestly, I was a bit nervous, she’s a fabulous stitcher. (Don’t believe me? Go see.) Not only that but I also wanted to do something inspired by The Smiths that hadn’t been covered before. (The January theme for the swap being music and Nicole being a huge fan of The Smiths.) There are some really great pieces out there. (This, for example. And these, and some more. All, seriously great.) It took a minute to really find something that I not only liked, but also that I could make something of my own out of. 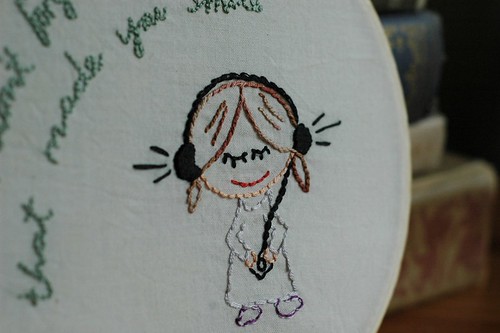 Once I had the song — Rubber Ring, I still wasn’t quite satisfied with just this one piece. I mean, I like it, I like it a lot, but it didn’t seem enough. Not just in the sense that it’s simple, but that it doesn’t quite capture the whole feeling of the song. It isn’t just about songs that make us happy, but also those that make us cry – or feel anything, really. Songs that well, as Morrissey says, saved our lives.

Then, I remembered I had a half dozen handkerchiefs, just waiting for the right project – and the second piece (which reads “don’t forget the songs that made you cry”) just fell into place.