If you’re in the Northern Virginia area, come check out Fiber: Exploring Today and Remembering Yesterday, a group exhibit now on view at the Verizon Gallery at the Ernst Cultural Center on the Annandale campus of Northern Virginia Community College. My lamentations quilt is among those being exhibited.

Full details about the opening reception below:

END_OF_DOCUMENT_TOKEN_TO_BE_REPLACED

Sometimes I just need to stitch-it-out. A little phrase or snippet will lodge itself in my consciousness and I need to stitch it just to put it out of my head.

Today, it was a little hastily written “I have no time.” from Evariste Galois that popped up. The history of mathematics is one of those topics that I get a little nerdy about. You know how some people will go off if you tell them that Edison was the best thing ever — and they’ll tell you no, it was actually Tesla who was the bad-ass? I get like that sometimes about mathematicians (like don’t tell me Newton invented Calculus).

Galois is one who was a young genius, and also active in politics in France in the early 1800s. He died at 20* in a duel over a woman. And the night before furiously wrote down proofs, but he ran out of time. “I have no time.” is but one of the things he put to paper that night.

I stitched it as a reminder that while it might seem like my life is a harried scramble at times, it really isn’t. Taking a breather is perfectly fine and relaxing is a good idea.

_________
* At 20! And he was such a genius that the other mathematicians at the time couldn’t understand his proofs. In the end, he invented a whole new branch of mathematics. I cannot fathom being that smart so young.

The past few months have been really, really good to me.

First, I have a few photos of my work in the Do It Yourself edition of Flow magazine. It’s all in Dutch, but it is a very wonderful and inspiring publication.

I am a little more than happy. (Especially about the part where I am across the page from Jenny Hart!)

And second, my paper quilt, lamentations, has been accepted into a local exhibition entitled Exploring Today and Remembering Yesterday. More details to come! 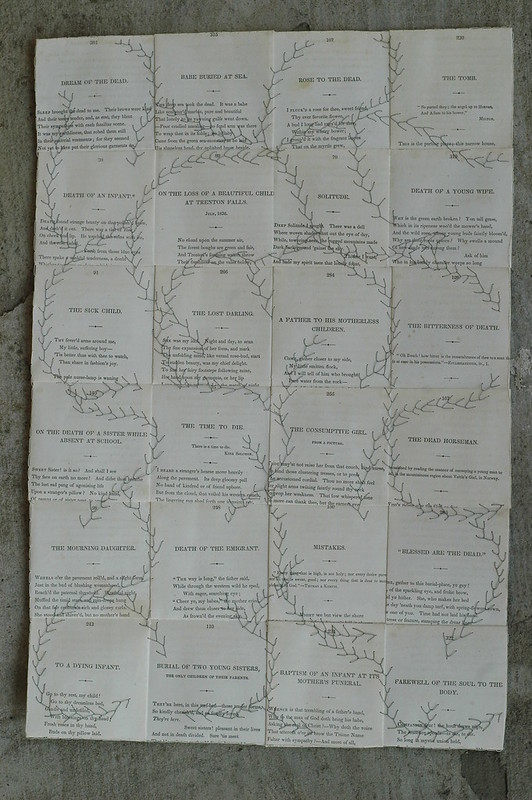 This piece is one that I’ve been working on (mostly in the evenings) for a few weeks now. The poems are from the book with the embossed pages and the engravings. Most of the poems are elegies and have the saddest titles: Death of an Infant, A Father to His Motherless Children, Baptism of an Infant at its Mother’s Funeral. I wanted to really highlight these titles. So I picked 24, cut them into 3.5″ squares, sewed them together by hand, eyeballing the “seams” and hoping to keep it pretty square. In the end, it more or less ended up pretty even. Then I added some feather stitching — which was actually the hardest part, I poked all the holes in one go (making a pattern of sorts with a tracing paper overlay), and keeping them straight was not easy. I didn’t get it perfect, but I don’t mind. 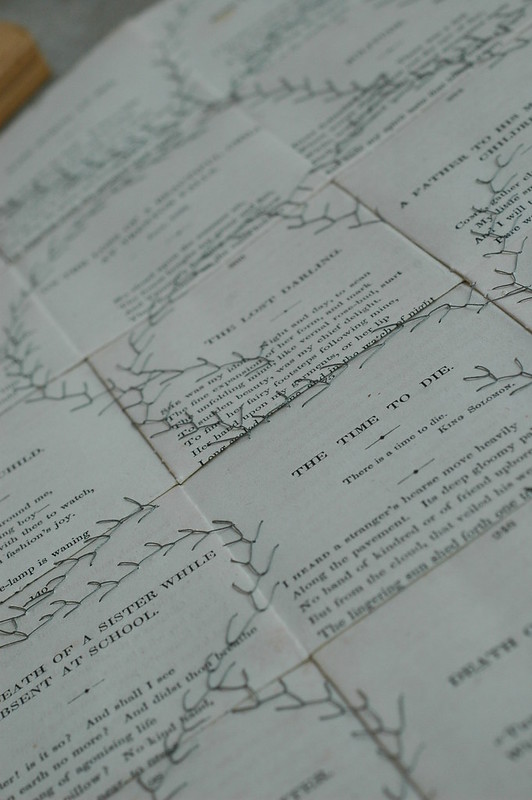 Posted in on paper | 3 Comments

Burlap – almost done the first side 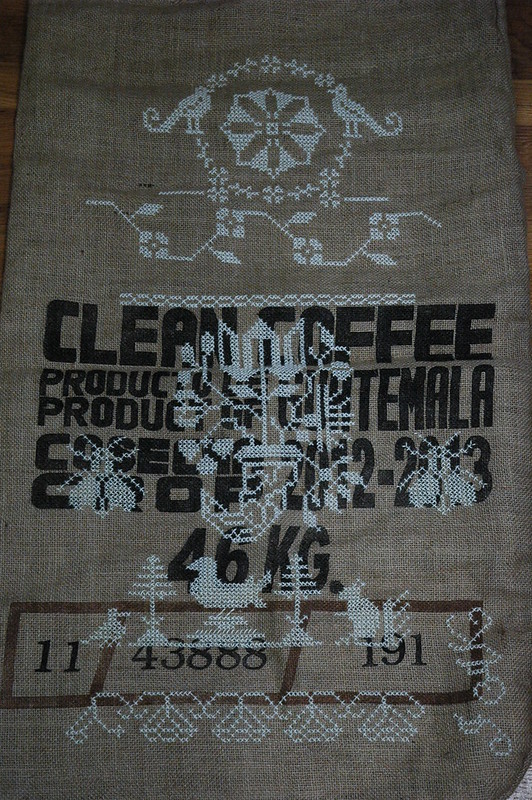 I’ve been slowly working on adding things to the burlap coffee bag. I am pretty sure that this side will be done once I finish up the flower in the bottom left hand corner. Then, I will move to the other side. This project has been pretty satisfying. Working big like this — I’ve been stitching over 2 using size 3 crochet thread in natural, and with a big plastic kid’s needle — has made for pretty quick progress. And as I am always obsessing over tiny flaws in my work, improving and not being overly worried about everything being perfect has been really liberating and a very good exercise for me. I think the only thing I would have done differently on this side would be to start from the bottom and work up, instead of going from the top down.